The Traveller is an advanced time traveler from the far future. He has arrived in the present time in order to restore the timeline to its original state. 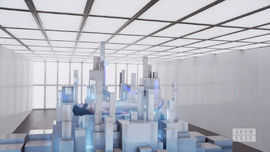 The Traveller originally came from a time hundreds of years from the present, and was sent back to chronicle and preserve history. Something changed during his travels, causing the future he came from to cease to exist. With no clear path to repair it, he traveled further back in time, recruiting followers along the way. However, upon observing the unusual series of events unfolding during the present time, he was given reinvigorated hope, and believes there will be a moment soon where everything can be repaired.

At some point, the Traveller ended up within the Freelancer base lead by Catherine, and remained there for an unspecified amount of time.

After having been abducted from a morgue, Curtis Chens' lifeless body was brought to The Traveller by the Freelancers. He was able to merge Chen's consciousness from another timeline into it, effectively resurrecting him.

Although the Traveller's presence was not yet known to the other time travelers, his existence was alluded to. Catherine briefly mentions him when discussing the history of the organization with Kiera. (3.1) Kiera later notices the entrance to The Travellers chamber, questioning what was inside but receiving no answer. (3.5) Catherine is seen consulting him a few times as well, at one point mentioning to Warren that communicating with him is "like listening to 16 channels at once". (3.6)

During Kiera and Brad's attempt to rescue Alec from the Freelancer base, Chen releases the Traveller from his chamber. (3.12) The two are then seen observing the arrival of the future soldiers after the activation of the time beacon, with the Traveller exclaiming "It has begun". (3.13)

The Traveller continues to observe the others from a distance, with Chen spreading his information to the select few that can impact the future. He finally informs Kiera and Alec of the Traveller's true purpose, claiming that the both of them (along with the machine being built by the future soldiers) will all have a part to play in his plans.

Alec initially dismisses the Traveller's abilities as "metaphysical bullshit", but comes face to face with him soon afterwards. Tapping Alec on the forehead, the Traveller sends him to a pocket dimension where he encounters his equally surprised future self. As the two converse, Alec realizes that he is the one who gives his future self the proof that time travel is possible, and therefore that the Traveller is responsible for kick-starting the events that would lead up to the initial time jump from 2077. (4.4)

During the climax, The Traveller is seen standing in the Future Soldiers' portal machine, watching Kiera as she enters it. Activating the Quantum Device within the rift, he is able to return to what is assumed to be his original timeline, the very same one that Kiera is sent to. (4.6) 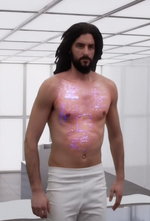 The Traveller is shown to have highly advanced technology seemingly embedded into his body. This technology, as we have seen thus far, allows him to travel to any point in time at will.

This technology also gives him the ability to transfer, or "merge", a person's consciousness into a body from another timeline simply by tapping their forehead (as was done with Curtis Chen). In a similar fashion, he is able to transport other people (or at the very least their consciousness) across timelines. He is shown doing this to Alec in order for him to meet his future self, though their meeting place seems to be a pocket dimension of sorts.

Community content is available under CC-BY-SA unless otherwise noted.
Advertisement